Plentiful sunshine and breezy seas and mountains: Greece has strong potential for renewable energy. But the country’s debt problems have stalled progress towards a cleaner future.

With 50 percent more solar irradiation per square metre than Germany, Greece has among the highest potential for renewable energy in Europe. But only a small fraction is actually being used. Overcast Germany has installed more than double the solar photovoltaic capacity
(499 watts per person) than sunny Greece (240 watts).

Greece’s wind energy potential is also grossly underutilized. The islands of the southern Aegean (excluding Crete) are an example: they could generate around 6,000 megawatts (MW) from wind – more than 70 times the current capacity – even taking into account constraints such as planning restrictions and the need to protect nature and archaeological sites. Installing, operating and maintaining the turbines could create more than 1,100 jobs.

Europe’s first wind turbine was installed on the island of Kythnos in 1982. Greece’s renewable energy has since expanded significantly, mainly due to a favourable feed-in tariff and the priority given by the grid to absorbing renewable electricity. Between 2007 and 2016, wind capacity more than doubled from 846 MW to 2,374 MW. Photovoltaic capacity expanded from a mere 9 MW in 2007 to 2,611 MW in 2016.

Rising renewable capacity along with a fall in demand due to the economic crisis has led to renewables increasing their share of Greece’s electricity mix. 2016 was a historic year: renewables, including large hydro, supplied 30 percent of the power in mainland Greece’s grid, for the first time surpassing lignite, which fell to an all-time low of 29 percent.

Two factors drove this growth. One was a 2009 European Commission Directive on energy, which triggered an ambitious national law to promote renewable sources. The second was a fall in the cost of installing renewables: between 2007 and 2014, the price of photovoltaic modules fell by 79 percent; that of wind turbines dropped 25 percent. These drivers helped overcome other longstanding barriers: the lack of coordination among authorities, delays in issuing permits, uncertain rights to land, and shortcomings in spatial planning.

But the 2014 financial crisis in Greece stalled the growth in renewables. First, a special account that pays renewable producers fell deep into the red. As part of its debt-relief agreement with its main creditors, the government undertook to eliminate this deficit. It cut inflated photovoltaic
tariffs, with retroactive effect. But the cuts also extended to wind and small hydro, which were not to blame for the deficit. And the cuts burden only the producers of renewables, although fossil fuels contributed significantly to its size.

Second, the capital controls imposed in 2015 have aggravated the problems that the Greek banking system has been facing since 2010. The country’s cost of capital is now 12.6 percent, seven times higher than for Germany, making investments in renewables in Greece very risky. The national goal of a 40 percent share of electricity consumption for renewables
by 2020 is now out of sight.

A draft law for “energy communities”, slated for 2018, would recognize citizens’ rights to produce, store, sell and consume their own energy. This is a step in the right direction:
local organizations could become a vehicle for an equitable energy transition in Greece. They would also help assuage local resistance, especially in the many islands not connected to the mainland grid, where groups opposing wind energy have emerged.

Technological solutions exist for islands that currently rely on fossil-fuel-based generators to switch to green power. The island of Tilos, near Rhodes, for example, has installed wind turbines, solar panels and batteries, along with a smart energy management system
that can manage the local micro-grid.

The immediate forecast looks overcast. Renewable-energy producers will have to adapt to a new support scheme that ditches a feed-in-tariff system in favour of electricity auctions. They will also have to compete with fossil fuels, which have powerful political backers. The government-controlled Public Power Corporation, for example, is constructing a new 660 MW lignite plant and is planning another one to generate 450 MW, despite the decline in the economics of lignite. 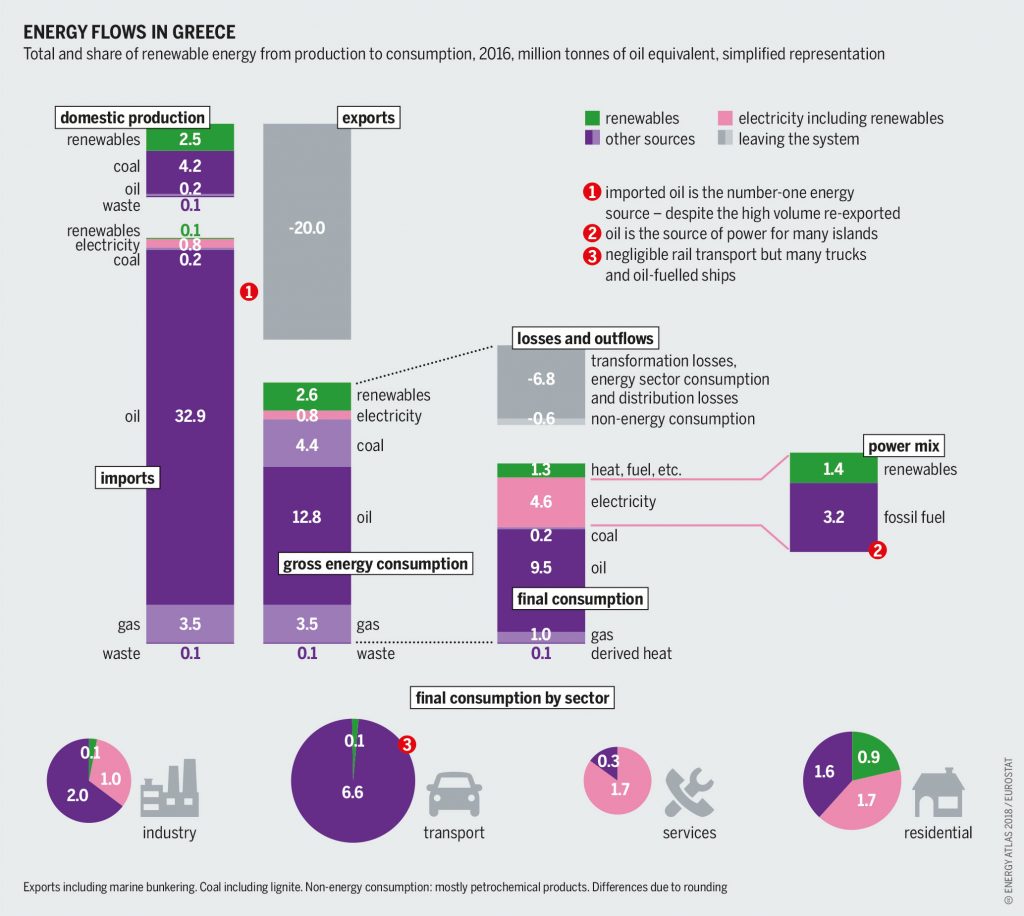 Both the corporation and the government seem intent on persisting with oil-based power for islands that are not yet on the grid, and inter-island connections are proceeding slowly. The government also supports the construction of the EastMed pipeline to transfer gas from Israel and Cyprus to Italy through Greece.

A change in the political weather would make the outlook sunnier. The national energy market could be fully integrated, and collaboration with neighbouring Balkan countries could be intensified. Funds from the European Union Emission Trading Scheme could accelerate inter-island connections, and renewables could be developed in the non-connected islands. Such initiatives could help Greece become a true hub for green energy.