To complement renewables, we will need power plants that can change how much energy they produce relatively quickly. To pay for such reserve generating capacity, the power market will need to be redesigned.

Already, it is clear that intermittent solar and wind power will eventually cut deeply into baseload power. Energy experts have been aware that baseload power is incompatible with renewables for years.

So what do you do when the sun is not shining and no wind is blowing? Outside Germany, it is often said that conventional power plants will be needed as bridge technologies as we switch to renewables this century. In particular, there is talk about the need for baseload power, which fluctuating wind turbines and solar panels cannot provide.

Germany already gets so much of its power from wind and solar that it has a different viewpoint. To the surprise of many foreign onlookers, Germans realize that baseload power demand will soon be a thing of the past. What is needed is flexible, quickly dispatchable power generation, not baseload.

The difference is easy to understand if we consider central power stations, such as coal and nuclear plants. Ideally, these plants are switched on and run near full capacity until they need servicing. In reality, nuclear plants in particular do not ramp up and down within a matter of hours, and attempts to do so are bad for the bottom line in two ways: first, fixed costs remain the same, with only fuel costs being slightly reduced, so the cost of power from the plant increases; and second, the plants themselves undergo thermal fatigue, which can shorten their overall service lives.

How will the new energy system work?

Germany is therefore faced with a dilemma: how do you run an energy system around wind and solar energy? The need for flexibility was predictable, but the situation has come about much faster than most proponents of renewables expected. One German researcher’s “dental chart” shows what the effect would be if “only” 70 gigawatts of PV is installed by 2020 (keep in mind that the government’s official target is 52 gigawatts by 2020). 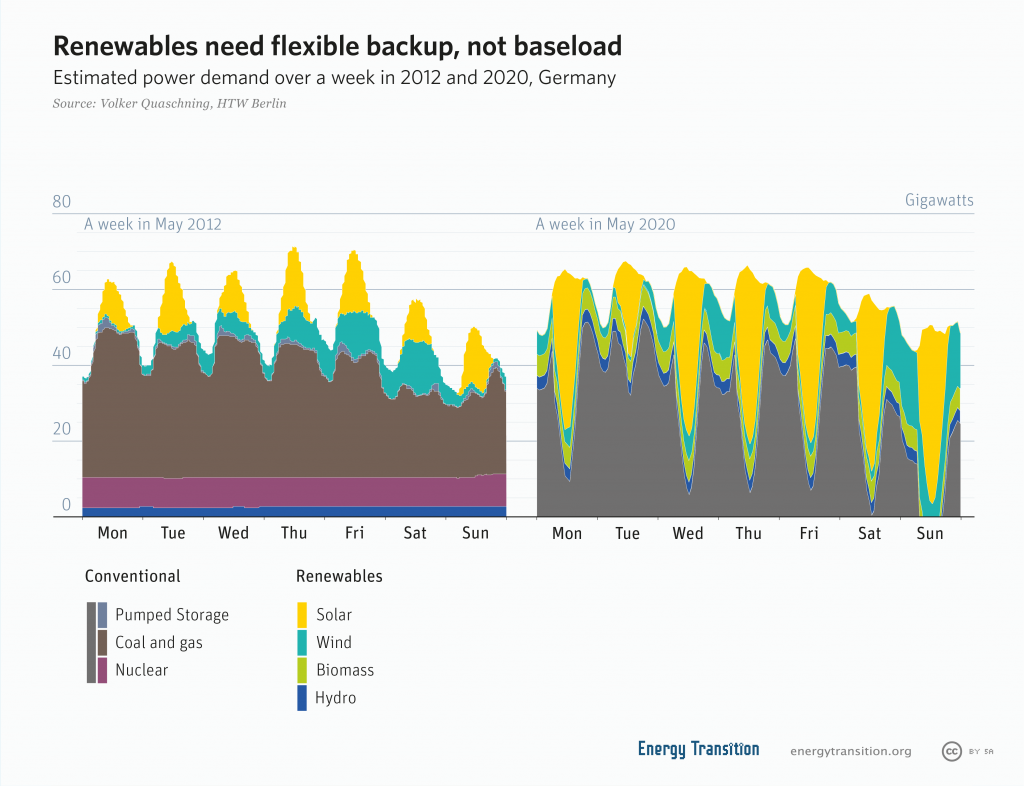 This chart has no baseload power at all; the gray area now represents medium and peak load.

This has already happened in Germany twice in 2018: for a few hours, solar and renewables completely replaced conventional energy. Germany is now changing the way it thinks about energy: the key is flexibility, not baseload.

One way to improve flexibility is through managing demand rather than supply. The government has run pilot programs in southern Germany to explore savings potential. Industries were able to identify devices which needed large amounts of energy, and set them to switch on when power is cheapest – balancing out the grid, and cutting costs. The same idea can be used for citizens: digitalization means that it’s possible to switch your laundry on at midday when electricity is cheapest.

Another solution is energy storage. Germany has already been working on pumped storage hydro stations, where water is moved upwards from reservoirs by solar or wind power when there is too much on the grid, and creates electricity by releasing water down as needed. So far, pumped storage only has a capacity of 40 GWh – not enough to balance out renewables. However, pumped storage is interesting from a social justice standpoint because it can help revitalize old coal regions. For example, an old coal mine in Westfalia is being transformed into a 200 megawatt pumped storage hydroelectric reservoir.

Battery storage is on the verge of changing energy markets, as it is able to store energy and then instantly adapt to demand. In some places, the process has already begun: Australia’s 100 megawatt lithium ion battery charges when renewable energy is cheap and sells back to the grid when its power is needed. Europe’s largest battery is only half that, but there are more projects in the works.

In the meantime, flexible, dispatchable power generators would be one way to fill the gap left by renewable energy. However, Germany would need as much as 50 gigawatts which could be ramped up at a moment’s notice. Previously, Germany had counted on natural gas turbines to supplement renewables, which would have required no additional infrastructure and would allow electricity to be stored seasonally. However, wholesale power prices are now so low on the power exchange that investments in additional generating capacity would not be profitable.

One way to incentivize generators to stay online is by capacity payments. Here, owners of quickly dispatchable generators would be paid not only by the kilowatt-hour generated, but also by the kilowatt kept on standby. In 2015, the German government resolved to keep the capacity payments small by increasing the “winter reserve” from 2.5 to 4.0 gigawatts, but that volume rose to 10.4 gigawatts for the winter of 2017/18. Germany has more than 100 gigawatts of dispatchable generation capacity. However, most of the so-called reserve is in reality coal plants which are being paid to stay offline because their capacity is not needed and adds to the already-high German energy emissions.

Consequences of the Energiewende for power companies

For Germany’s four biggest power companies, this new situation represents quite a dilemma. They set up their generating capacity based on the assumption that they would be able to sell power at a great markup during times of peak consumption. Now, power consumption remains unchanged and still peaks at above 70 megawatts on certain days, but solar and wind have already pushed back the entirety of baseload twice by mid-2018. Just a decade ago, these power companies still belittled wind and solar power as niche technologies that would never be able to make up a big chunk of power supply; now, solar and wind power are increasingly making these firms unprofitable.

Renewables have created a sea change for energy companies: how can they react to lower wholesale energy prices? The Swedish utility Vattenfall has also announced plans to step away from its coal assets in Germany, but the motivation is political, not financial; the Swedish government elected in 2014 wants the firm to be as clean abroad as it is at home.

In 2016, the first major shakeup occurred: German utility E.On split into two companies: one for renewables and new services, and one named “Uniper” for conventional energy. The utility RWE also split into two companies, one for its lignite and one for its renewable capacities. E.On was the firm affected most by the nuclear phase-out; RWE, the most affected utility by talks of a gradual coal phase-out. In 2018, E.On announced it would be leaving renewables completely to focus on managing and supplying energy; RWE will take its windfarms, becoming Europe’s third-largest producer of renewable energy with 8GW of renewable capacity and another 5GW on the way.