Germany wants to get 25 percent of its power supply from cogeneration units by 2020 because cogeneration is much more efficient than separate power and heat generation. The Cogeneration Act therefore pays bonuses for cogeneration relative to system size.

Cogeneration is when part of the waste heat from a power generator is recovered and stored, increasing the efficiency of fuel consumption. 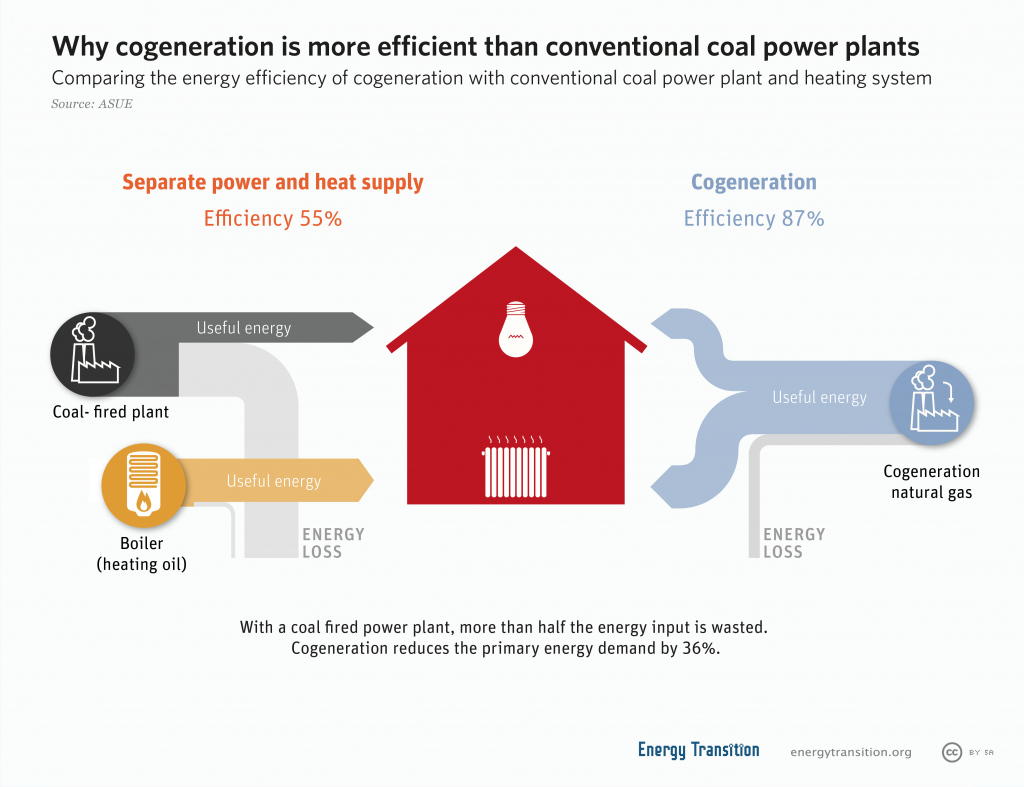 The goal defined in 2009, when the first amendments went into effect, was for Germany to get 25 percent of its power supply from cogeneration units by 2020 (compared to 14.5 percent in 2010).

The law sets a bonus for each kilowatt-hour of power produced by the cogeneration unit, and that power has priority on the grid. Interestingly, there is no special payment for the heat generated; the incentive comes in the form of a bonus for the power produced. Furthermore, the only requirement for efficiency is that the cogeneration unit must reduce primary energy consumption by ten percent compared to the provision of the same amount of heat and power from separate generators.

The act was updated in 2016, slightly lowering the previous goal for 2020 to 110 terawatt hours generated by CHP. Germany overshot this goal in 2017, generating 117 terawatt hours, even coming close to the 2025 goal of 120 terawatt hours.

The 2017 Cogeneration Act implemented two main changes. First, the bonus was increased from 5.41 to 8 euro cents per kWh for small cogeneration units; this amount to be paid on top of the average baseload wholesale rate at the European Energy Exchange (EEX), also known as the “cogen index.” And second, the duration was changed from 10 years to 60,000 operating hours.

There is a debate in Germany about whether cogeneration units should be run based on power demand as opposed to heat demand, however. Critics of the current policy argue that shortfalls in heat production may require the use of inefficient backup heating systems to cover peak demand, which can worsen overall efficiency.