Tax the bads, not the goods – as the slogan puts it, environmental taxation increases taxes on environmentally unfriendly activities (such as fossil fuel consumption).

But it is also revenue-neutral, for the tax revenue can be used to lower the costs of something society considers good (such as, in the case of Germany, labor, when the revenue is used to offset payroll taxes). The policy was very successfully implemented in Germany and created some 250,000 jobs even as it reduced fuel consumption and made German workers more competitive internationally.

History of the German energy tax

Since 1951, Germany has had a petroleum tax, which has been called the energy tax since 2006. As of 2007 (the last time it was changed), 65 cents was charged per liter of gasoline, for instance, roughly equivalent to around 2.50 euros (more than three dollars) per US gallon.

In other words, Germany’s petroleum tax alone costs roughly the same as gasoline itself does in the United States, for instance, and we still need to add on sales tax!

Unlike the previous petroleum tax, environmental taxation is revenue-neutral, meaning that it offsets a revenue stream somewhere else. In the case of Germany’s “eco-tax,” some of the revenue went to a budget that funded renewables, but most of it was used to lower payroll taxes because the government felt that the main thing hurting the German businesses was the high cost of German workers.

From 1999-2003, an eco-tax was implemented for the first time in annual increments under the governing coalition of the Social Democrats and the Green Party. It applied not only to gasoline and diesel for vehicles, but also to heating oil and fossil fuel (natural gas, coal, oil, and liquefied petroleum gas) used to generate electricity.

Tax the bads, not the goods

The idea that a tax paid at a filling station should help offset employee pensions struck Germans as a bit odd at the time, but it is in fact what makes revenue-neutral environmental taxation special.

The idea is that you tax “bad” things so that people will consume less of them (such as finite fossil fuel), not “good” things that you want more of (such as jobs). And because the tax is revenue-neutral, political opponents cannot claim that taxes are being raised – because another revenue stream already being paid is lowered in the same amount of the new levy. 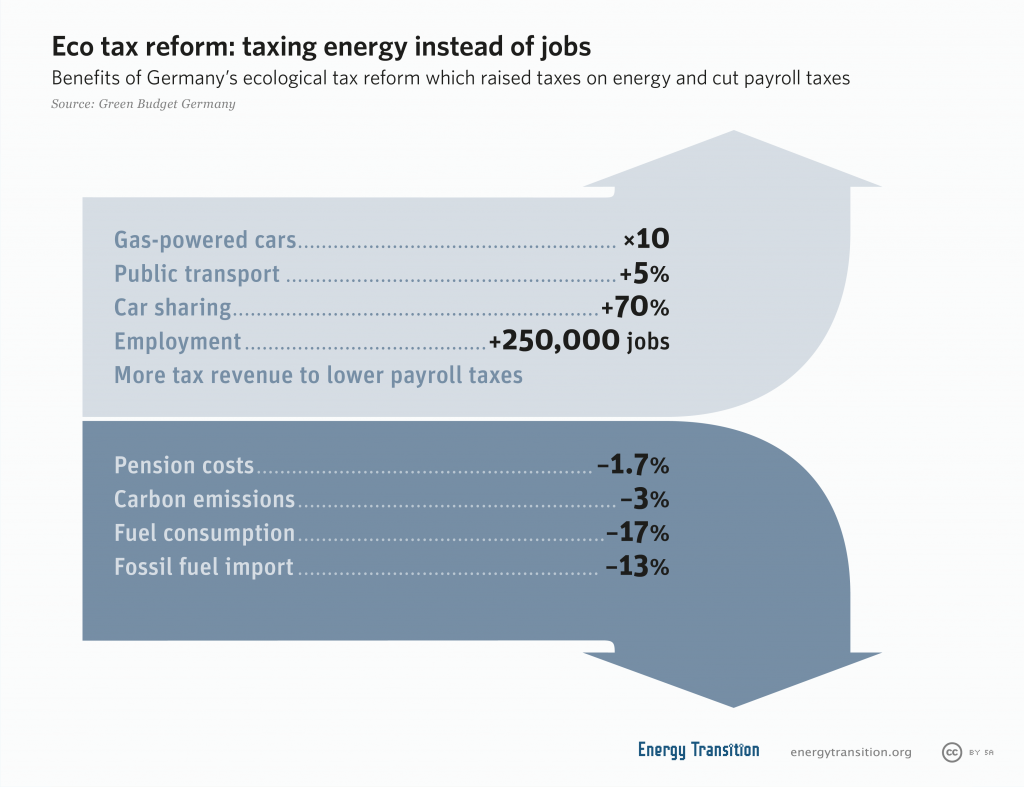 Each year from 1999-2003, the tax on a liter of gasoline/diesel was increased by 3.07 cents, which is not much, but it sent a signal to consumers to get ready for a 15.35 cent increase over that five-year period. The public was able to react to these higher prices in a number of ways, all of which were desirable: driving less, driving in a way that reduced fuel consumption, buying more efficient cars, carpooling, taking public transport, cycling or walking, or moving from the countryside into the city, where they could more easily do without a car.

According to Green Budget Germany, which lobbied for the eco-tax, fuel consumption dropped each year during the implementation of the eco-tax, and the number of people using public transportation increased every year. Likewise, sales of efficient cars also increased each year. In addition, payroll taxes dropped by 1.7 percent, and less expensive labor is estimated to have led to the creation of 250,000 new jobs. However, since 2007, the eco-tax has not been adjusted, leading to a gradual depreciation of the impact.