Renewable energy is making progress in the EU, but it is uneven across member countries.

Renewables have moved from being a sideshow to the main act in Europe’s energy theatre. Government support has been key to this – but renewables are increasingly able to stand on their own.

Progress of renewables across Europe

Ten years ago, renewables were regarded by many as a threat to economic prosperity and growth. Advocates of the fossil-fuel industry, in particular, claimed that wind, solar and biomass sources were simply too expensive, and realistically would never be able to provide more than 3–4 percent of the demand for electricity. They feared that a switch to renewable energy would slow economic development across Europe.

Nevertheless, a number of European countries, most prominently Denmark and Germany, forged ahead and invested in pioneering renewable-energy sources, despite their apparent costs and unproven role. Today, renewables are no longer a fringe technology. They have accounted for the majority of new generating capacity for eight years in a row, and in 2015 they made up 16.7 percent of the EU’s final energy consumption.

The biggest boost has come from the rapidly falling costs of the technologies. Since 2009, the cost of solar has dropped by a staggering 75 percent, and wind by 66 percent. Of course, stark differences still remain among member states of the EU; renewables currently account for 30 percent of gross final energy consumption in Finland and Sweden, but just 5 percent in Luxembourg and Malta. 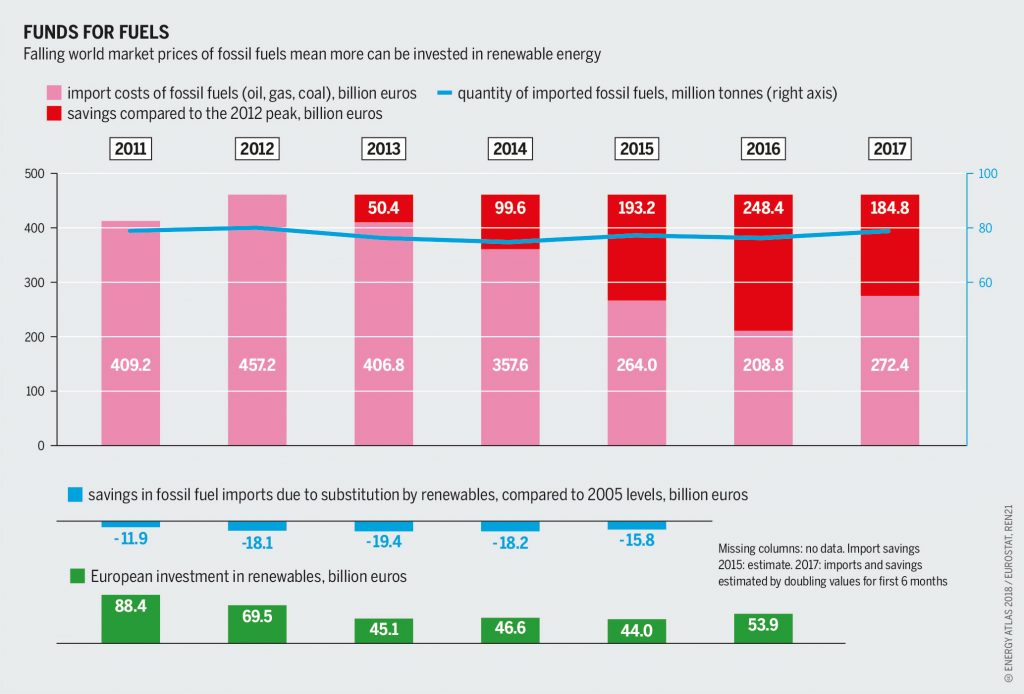 However, one trend is very clear: renewables are becoming ever more competitive with conventional sources such as natural gas, coal and nuclear. The build-up of renewables has helped the EU reduce its fossil-fuel consumption by 11 percent since 2005 and to cut the import bill for fossil fuels by more than 35 percent since 2013. Renewables have mainly been used to replace coal (half of the fossil fuels substituted) and natural gas (28 percent). Substituting oil has been less successful because renewables are not yet widely used in the transport sector, where oil is the main fuel.

Throughout Europe, fossil fuels have traditionally benefited from hefty public subsidies, creating a powerful incentive to burn them. Renewables have also received incentives, for example in the form of feed-in tariffs where producers of renewable energy receive a fixed purchase price for the power they generate.

But these incentives have been nowhere close to those offered to the fossil-fuel industry. Across the EU, the EU itself and its members’ governments distribute over 112 billion euros a year in handouts to the fossil-fuel sector. In contrast, renewables receive 40 billion euros. A switch from fossil fuels to renewables would free up money for more pressing social and welfare needs.

The rise of renewables has not slowed economic growth in Europe. Between 2006 and 2015, the European economy grew by a sluggish 0.7 percent while the share of renewables in final energy consumption grew by 7.7 percent. But the economy was held back by the global financial crisis of 2008–10, not by the growth in renewables.

Since 2005, greenhouse gas emissions in Europe have fallen by 10 percent, and for the first time, the continent has seen a decoupling of its economic growth and greenhouse gas emissions. In essence, this is what the energy transformation can do: trigger economic prosperity while reducing the carbon footprint caused by burning fossil fuels. Renewables play a major role in driving this trend.

While Europe has been a world leader in investments in renewable energy, its share in global investment fell from 46 percent in 2005 to 17 percent in 2015, as other regions discovered the economic opportunities offered by renewables.

Nevertheless, Europe aims to be a global leader in research and innovation in this field. The EU’s biggest research programme, Horizon 2020, allocates 6 billion euros to renewable energy for the period 2014–20.

Employment in renewables in the EU

The renewable sector is already a big employer, providing more than a million jobs in Europe in 2014. In terms of jobs per capita, Europe’s renewable sector was number two in the world in 2014. It now ranks fifth, behind China, the United States, Japan and Brazil, and it is in danger of further losing out to emerging economies.

Most jobs in renewable energy are in the wind, solar and biomass sectors, as these technologies have seen the fastest global growth rates and the sharpest cost decreases in recent years.

Greenhouse gas emissions in the EU

Europe aims to cut its greenhouse gas emissions by 80 percent by the middle of this century. To achieve this, the share of renewables will have to grow significantly, not only in the power but also in the heating, cooling and transport sectors. 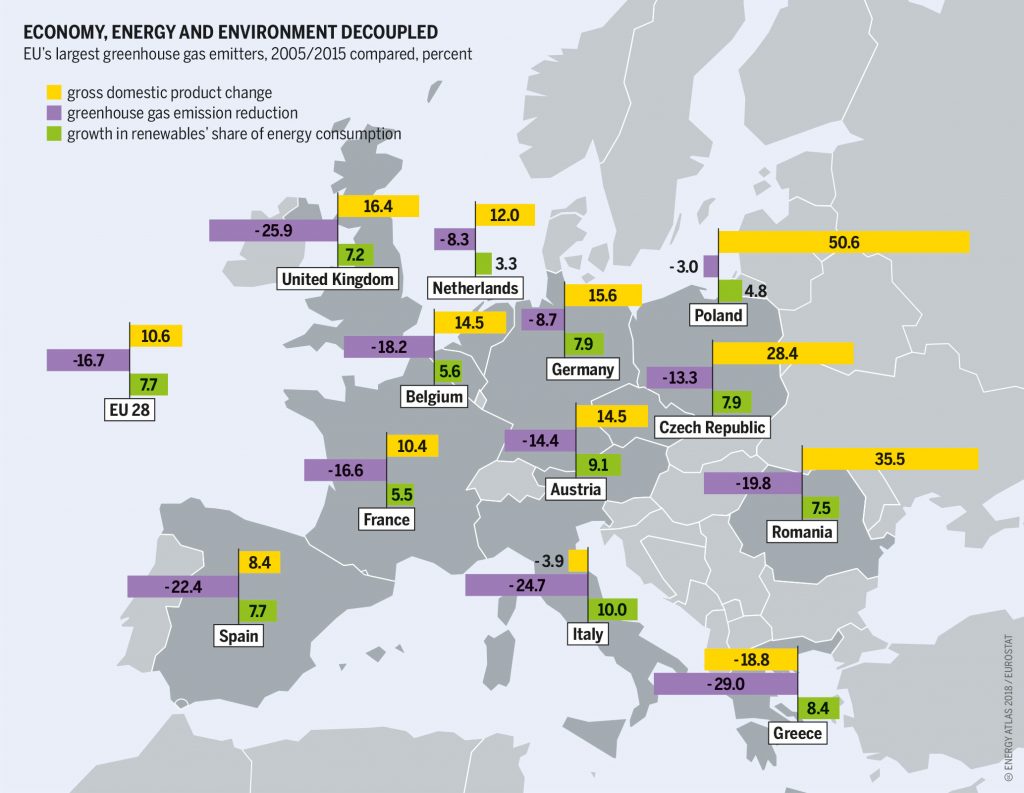 The economic realities of renewables – as well as environmental or climate concerns – make them a preferred alternative to fossil fuels, and many Europeans already benefit directly from this development.